Fishing for Giant Carp and Catfish

UK angler Jason and his partner Jackie continued their fishing holiday with a visit to Bungsamran Lake in Bangkok.

On arrival the anglers chose to start fishing on the public bank, casting out large method balls suspended beneath sliding float set ups.

It was not long before one of the floats slid under the surface signaling the beginning of another grueling battle.

Jason wound down into the fish causing the catfish to respond with a powerful charge across the lake.

Several more unstoppable runs followed each time ripping yet more line from the tightened spool of the reel.

Ten minutes later a good sized Mekong Catfish surfaced close to the fishing platform and was duly netted by Nok.

The Mekong Catfish was estimated to weigh 20kg’s and was released after a few quick trophy shots.

Jackie was soon into another Catfish which once again powered off across the lake testing the angler to her limits.
The Mekong Catfish on this occasion was estimated to weigh 15kg’s before being released.

As the day progressed the anglers continued to add to their tally with both angler’s landing a succession of Mekong and Striped Catfish.

Later in the afternoon another high speed take indicated yet another Mekong Catfish had picked up the bait.

On winding into the fish the rod was dragged towards the surface as a large bow wave was created out in the lake.

Jason battled the unseen catfish on this occasion for an arm aching thirty minutes as it powered around the lake seemingly unstoppable.

At the end of the days angling the UK duo had succeeded in landing a double figure haul consisting of Striped and Mekong Catfish to an estimated 35kg’s. 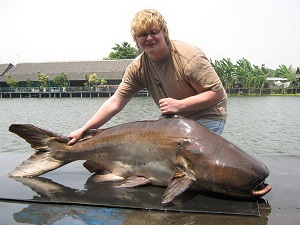