After catching a monster Giant freshwater stingray the previous day whilst fishing at the Maeklong River the Fishsiam team moved location to the Ban Pakong River in Thailand.
Hirosumi Yamaguchi from NHK channel in Japan and Dr.Zeb Hogan were also in attendance to record all stingray fishing on film in addition to carrying out scientific examinations of all fish caught by the team.
The Ban Pakong river contained all manner of floating and underwater debris which constantly fouled the angler’s lines.
Several occasions saw the anglers move position in an attempt to avoid the vast amounts of vegetation being carried by the river.
With the light fading a fast take developed on a rod fishing into the main flow of the river which pulled line from the multiplier savagely.
Winding down into the fish saw it kite on a long line upstream causing the anglers to quickly take to the boat.
A twenty minute battle ensued which saw the anglers fighting the unseen fish in midstream.
Continued pressure applied from above soon shifted the fish from the bottom causing it to move off upstream once again.
Several more occasions saw the fish clamped onto the bottom requiring the anglers to prize the fish from the riverbed each time.
After twenty minutes the stingray was finally brought up into mid water where it was quickly cranked up to the surface moments later.
The Giant freshwater stingray was transported to the riverside where Dr.Zeb Hogan carried out a scientific examination of the fish placing an external tag on the wing of the stingray.
The fish was observed to be a small male and was estimated to weigh 50kg’s.
The Giant freshwater stingray was quickly released after photography and swam away strongly 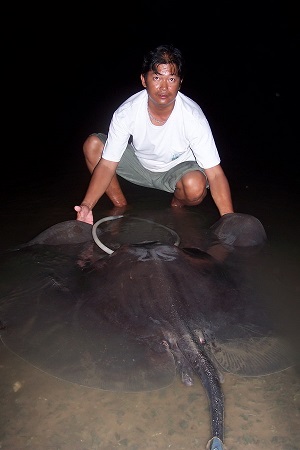