Fishing for Giant freshwater stingray on the Maeklong River

Once again the Fishsiam team visited the Maeklong River fishing for Giant freshwater Stingray.
The team was joined by Dr.Zeb Hogan and the Infocus production crew in an attempt to catch Giant freshwater Stingray for scientific examination and numeric tagging.
In addition veteran Giant freshwater stingray angler Calvin Tan from Singapore fished with the team.
After setting out early for a previously productive fishing area the team dropped anchor before positioning the rods on each side of the boat.
Large rafts of floating weed and rotting vegetation began to flow down the river continually fouling the taught braided mainlines and requiring the rods to be repositioned.
After almost four hours of continually repositioning the rods the barrage of floating debris came to a halt and fishing conditions seemed now to be ideal.
Moments later a powerful run developed which saw Calvin Tan once again playing a large Giant freshwater Stingray.
A forty minute battle ensued which saw the fish clamping onto the bottom with an unmovable force!
Continued pressure from directly above saw the fish raised from the muddy riverbed on several occasions only for it to once again to clamp onto the bottom.
After repositioning the boat at a different angle the fish finally left the sanctuary of the muddy substrate and proceeded to make slow ponderous lunges 20m’s beneath the boat.
Constant pressure on the fish saw the Giant freshwater Stingray brought to the surface where it was quickly secured by the team.
The fish was slowly transported back to the research site where it was placed in an aerated holding pool.
After a short scientific examination by Dr.Zeb Hogan the fish was identified to be a male and was measured at a width of just over one metre.
The fish was found to be in perfect condition and was released after a numeric identity tag was placed on the fish.
After releasing the fish the team continued to fish but did not experience any further action.
Massive rafts of rotting weed and vegetation continually affected the presentation of baits in the central section of the river making the fishing on this particular day extremely difficult. 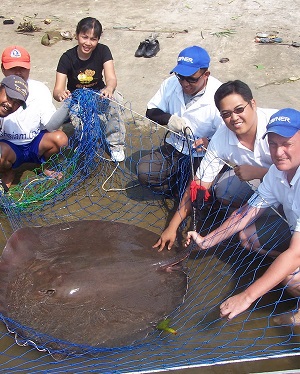