Another Thailand stingray fishing trip to the Maeklong River in Samut Songkran province saw the Fishsiam team fishing a previously productive area on the lower reaches of the river.
Several heavy stand up rods fitted with Okuma two speed multiplier reels were spanned out along the central section of the river with large livebaits impaled onto big Owner Circle hooks.

With the incoming tide making the water level of the river rise the anglers waited patiently for further developments.
It was not long before one of the rod tips slowly nodded before line began to evaporate from the reel!
Winding down into the fish saw the rod loop over into its full fighting curve as a large Giant freshwater stingray violently thrashed at the line with its tail several metres below!
Continued pressure saw the monster Giant freshwater stingray making a series of short unstoppable runs as it tried to sever the fluorocarbon leader.
On several occasions during the battle saw the unseen stingray clamping onto the riverbed in an attempt to thwart the angler’s attempts of extraction.
Each time the boat was repositioned above the fish and the pressure piled on in a bid to force the stingray from the muddy riverbed.

The stingray was finally brought up from the depths after a period of one and a half hours where it continued to bend the rod to its absolute limits.
With the net unfurled beneath the fish a sudden lunge towards the bottom saw the monster Giant freshwater stingray surging back towards the riverbed.
Seconds later the rod sprang back violently and a sickening cracking sound was heard!
With the rod doubled over at maximum strain the sheer power of the stingray diving back down into the depths had caused the rod to break several inches from the tip.
In the same instance the heavy fluoro leader had parted allowing the monster to escape back into the depths of the river.
The fish which had surfaced on two occasions next to the boat was clearly a true River Monster and was estimated to weigh well in the excess of 200kg’s!
After regaining their composure the anglers repositioned themselves in the productive area in the hope of hooking yet another Giant freshwater stingray.
Almost an hour later another rod signaled a take, this time the line slowly trickled from the spool of the Okuma multiplier steadily moving away with the bait.
On setting the hook it was immediately clear that the fish was an extremely large specimen.
From the beginning of the battle the Giant freshwater stingray displayed immense power towing the boat for several hundred metres on its initial run.
Continuous pressure was steadily applied seeming to have little to no effect on the unseen freshwater stingray.
After almost an hour of battling the unseen stingray it moved once again on a slow and determined run causing the boat to sway from side to side as it moved off once again beneath the boat.
Suddenly the rod tip sprang back as the Giant freshwater stingray came up from the bottom!
Furiously winding the reel saw line quickly being replaced onto the reel as the fish was brought up through the middle layers.
The rod was bent right into the water as the full weight of the fish was now felt by the anglers.
Several minutes passed as the stingray wallowed in the middle layer of the river before the fish finally came into view.
The pure white underbelly of the fish was soon just under the surface with the net carefully being unfurled beneath the stingray.
The Giant freshwater stingray was clearly a large female and was carefully secured alongside the boat.
The stingray was quickly transported to the riverside for a thorough examination by the waiting scientists from Chulalongkorn University in Bangkok.
After fitting an internal electronic identification tag and conducting various other scientific procedures the fish was measured at a width of 193cm’s before being released.
No further stingrays were caught in the remainder of the days fishing at the Maeklong River. 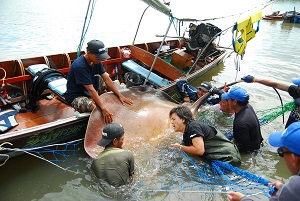