Fishing in Thailand in Koh Samui

Nigel Lofthouse an angler from the North of England visited the highly prolific Topcats fishery in Koh Samui, Thailand.
Fishing a combination of method and deadbait tactics Nigel caught various species including Alligator Gar, Spotted Sorubim and Mekong Catfish to 30kg’s. After a short period of inactivity Nigel’s maize and bread hookbait was picked up by a much rarer species.
After a brief ten minute battle an extremely large Niger Catfish was expertly netted by resident guide Yut.
On closer inspection the armored Amazonian catfish was observed to be an extremely large specimen and looked slightly bigger than the previous world record Niger recently caught by Gary Hawke.
The highly sought after catfish was weighed at a weight of 39lb 12oz beating the previous world record by almost four pounds.
This fish has been submitted to the IGFA and is a pending IGFA World record for the species. 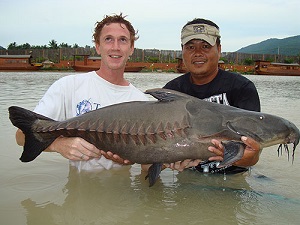