Fishing for Mekong Catfish in Bangkok

Norwegian angler Mathias and his companion spent their second day fishing for Mekong Catfish at Bungsamran Lake in Bangkok.
Both anglers chose to fish from the public bank and fished with sliding float set ups and inline feeders.
After loading the feeder with locally produced groundbait the anglers cast out into the lake towards showing fish.
Only moments later and one of the floats buried under the water as a catfish powerfully moved off with the bait.
Winding down into the catfish saw the rod pulled downwards as the fish made a powerful run towards the far bank.
The battle with the Mekong Catfish lasted almost ten minutes and saw the fish making a series of strong runs.
After bringing the Mekong Catfish to within yards of the fishing platform the Mekong Catfish broke the surface just out of netting range.
On seeing the net the Mekong Catfish embarked on another determined run back towards the centre of the lake.
The Mekong Catfish was finally brought to the waiting net where it was expertly scooped up by the guide.
The decent sized Mekong Catfish was estimated to weigh 20kg+ and was released after photography.
The day continued to produce fish after fish with both Mathias and his friend catching numerous other Mekong Catfish between the 10-30kg bracket.
Several specimen sized Striped Catfish were also landed during the days angling nudging the 10kg mark.
At the end of the days Bangkok fishing trip the anglers had amassed a nineteen fish haul consisting of Mekong Catfish to 30 kg’s and Striped Catfish to around the 20lb mark 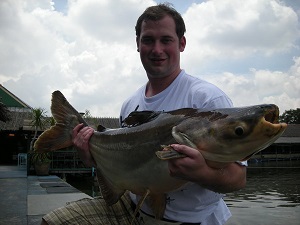