Fishing for Mekong Catfish in Thailand

The second day of their Thailand fishing holiday saw Nigel and Caroline fishing at Bungsamran Lake in Bangkok for carp and catfish. The anglers fished from a private bungalow and used bottom fishing tactics in an attempt to catch one of the monster Giant Siamese Carp that regularily show around the lake.
With fish showing all over the lake the anglers lightly baited several areas in front of the bungalow.
A few small Striped Catfish were landed in the first hour or so to relatively low weights of 8 kg’s.
Continually baiting the area soon had the fish showing heavily over the baited area with increased regularity.
Further Mekong Catfish were landed with the size of the fish getting larger as the afternoon progressed.
After landing several hard fighting Mekong Catfish to an estimated 25kg’s one of the rods tore off as a much larger fish moved off with the bait. The battle on this occasion lasted almost twenty minutes and saw Caroline holding on for dear life as the fish stripped line off the tightened spool.
After bringing the fish to the net on several occasions only for the Mekong Catfish to charge back off towards the centre of the lake the catfish was finally subdued and netted by the guide.
The Mekong Catfish was estimated to weigh between 45-50kg’s and was released after photography.
At the end of the days fishing in Thailand the newlyweds had landed another large haul of Mekong and Striped Catfish topped by a monster catfish of almost fifty kg’s. 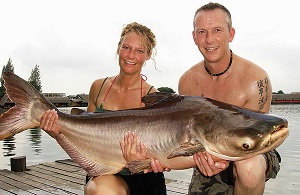