English angler Richard Larkin visited Bungsamran Lake in Bangkok fishing for Mekong Catfish and Giant Siamese Carp.
After meeting Boy the angler was soon fishing two rods on the public bank.
Richard fished with sliding float set-ups free running on fluorocarbon leaders with short braided hooklengths attached to Owner Gorilla hooks. Small coiled feeders loaded with local groundbait were incorporated into the set-up with bread flake mounted onto the hooks for hookbaits. After casting into the lake Richard’s float was immediately pulled under the surface as a Mekong Catfish moved off with the bait. Richard wound down into the fish as it immediately powered off into the centre of the lake on a series of unstoppable runs. After a relatively short ten minute battle a Mekong Catfish of 35kg’s was brought to the net before being expertly netted by Boy.
After recasting the floats towards the middle of the lake it was not long before one of the floats suddenly burst into life!
Once again Richard commenced battle with the unseen catfish with another ten minute battle resulting in yet another Mekong Catfish of approximately 20kg’s being netted by Boy.
The days fishing continued as it had began seeing Richard land a succession of Mekong and Striped Catfish ranging between 8-25kg’s.
Unfortunately Richard would suffer from a reoccurring shoulder injury which would see him finish fishing prematurely rendering him unable to fish for the following five days.
After fishing a short eight hour session the English angler had amassed a twenty fish haul with Striped and Mekong Catfish to 35kg’s 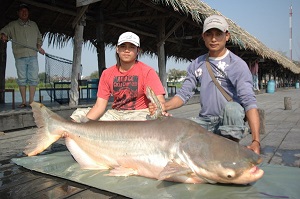