Fishing for Mekong Catfish in Thailand

Visiting anglers Clifford Bunyan and Jamie from Milton Keynes in the UK decided to try fishing at Bungsamran Lake for their second day of their fishing holiday. After an early morning start the anglers were soon casting out large balls of locally produced groundbait to a prebaited marginal area.
The anglers fished 4oz Fox method feeders with fluorocarbon leaders and short braided hooklinks with super sharp Owner hooks popped up with rig foam.
Continual topping up of the swim with bait saw the swim start to display signs of feeding fish.
On only his second cast Cliff was into a fish straight away which powered off towards the centre of the lake.
A ten minute battle followed which saw the angler battling a large Mekong Catfish.
After a few fraught final moments at netting the fish was finally hoisted up onto the unhooking mat.
The catfish was estimated to weigh 25kg’s and was quickly released after a few trophy shots.
Jamie was soon into a fish which once again powered off into the lake.
Another Mekong Catfish was expertly netted by Boy ten minutes later.
The days fishing continued in much the same way with both anglers banking a series of Mekong and Striped Catfish on their method feeder tactics.
Later in the afternoon Cliff struck into a much bigger fish which steamed off towards the far end of the lake with alarming speed.
Applying maximum pressure on the spool saw the unseen Mekong Catfish kite on a long line towards the far bank snags.
Rapidly winding the reel Cliff managed to replace some of the line back onto the spool.
Heaving with all his might the angler began to pump the large catfish towards him inch by inch.
Another powerful run saw the rod bent into its full parabolic curve as the angler battled the monster catfish.
After a further ten more minutes of ploughing up and down the margins the fish was finally netted on the second attempt.
On hoisting the fish onto the unhooking mat the fish was estimated to weigh 55-60kg’s.
The fish was released after photography.
At the end of the days angling the UK duo had accounted for thirty five fish with Mekong and Striped Catfish to 55-60kg’s 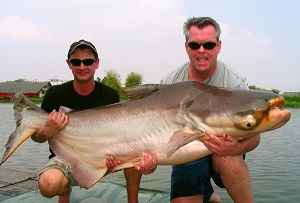