US angler Rene went fishing at Palm Tree Lagoon in Ratchaburi in search of Arapaima and other predatory monster fish.
After catching several Giant Freshwater Stingrays from the Maeklong River the angler decided to target the monster Arapaima in Palm Tree Lagoon.
Fishing with livebaits and deadbaits the angler quietly cast to a marginal area close to the onsite restaurant.
It was not long before an unseen predator took a liking to the large mackerel fillet placed in the margins causing line to be ripped from the spool.
Quickly setting the hook resulted in the fish charging powerfully towards the centre of the lake on a series of unstoppable runs.
The battle raged for twenty minutes and saw the unseen Redtail Catfish testing the angler to his absolute physical limits.
The Redtail Catfish was finally netted revealing a massive catfish which was estimated to weigh 37kg’s.
After displaying the fish for several trophy shots the monster catfish was released back into the lake.
Rene continued to catch steadily throughout the day catching several carp species on a rod fished to a heavily prebaited marginal area.
The US angler caught Small scaled Mud Carp and Rohu to relatively low weights of 6.5kg’s throughout the afternoon.
After a series of aborted takes the US angler finally managed to hook another predator this time in the shape of a Giant freshwater stingray.
The prehistoric predatory giant immediately clamped onto the bottom requiring the onsite guide to prod the bottom of the lake with a long wooden pole.
After shifting the tricky predator on several occasions the stingray was eventually brought up off the bottom where it was quickly cranked across the surface towards the weighting net.
The Giant Freshwater stingray was estimated to weigh 25-30kg’s and was released after a few obligatory trophy shots 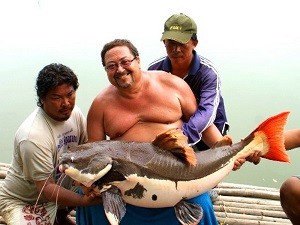