Expat angler Brendan returned to Palm Tree Lagoon in Thailand fishing for the various carp species which are present in the lake.
Fishing with his standard method tactics Brendan heavily baited marginal areas at various parts of the lake with locally produced groundbait.
The Bangkok resident offered large balls of groundbait packed tightly onto 4 oz Fox Method feeders with fluorocarbon leaders and super sharp Owner hooks finishing the set-up.
With the baits placed in the nearby margins the angler kept a low profile sitting a few metres behind the rods.
After a fairly slow start a tentative take saw the angler connected to the first fish of the day.
The fish boiled close to the surface as the angler applied maximum pressure to keep the fish away from the nearby wooden supports.
A few seconds later a lovely Rohu Carp was brought over the waiting net.
After hoisting the fish onto the landing net and parting the mesh an immaculate Rohu of an estimated 12lb’s greeted the angler.
After rebaiting the rods the angler recast onto the baited area and waited for more action.
Minutes later saw another run develop on a rod fished close to the wooden supports seeing the fish head straight out into open water.
Brendan immediately applied side strain bringing the fish to a halt in the centre of the lake.
Quickly regaining line on the spool saw the fish charging up and down the margins sending up plumes of bubbles in its wake.
Moments later a Catla Catla (Asian Carp) surfaced and was promptly netted.
The fish was estimated to weigh a mere 10lb’s and was found to be in perfect fighting condition.
The days angling progressed along a similar pattern with the angler accounting for a double figure haul of made up of a variety of Asian carp species.
The haul was mainly comprised of Rohu with fish to an estimated 15lb’s with several Catla carp also making an appearance with relatively low weights and a small bonus Giant Siamese Carp of 12kg’s being the largest fish of the day. 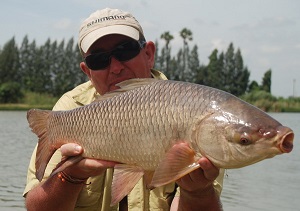