UK angler Richard Larkin returned to Palm Tree Lagoon on another fishing trip in search of Monster fish.
Richard fished 4oz Fox Method feeders loaded with local groundbait and flavourings in an attempt to catch some of the various carp species that reside in the lake.
Super sharp Owner hooks were popped up three inches above the feeders with rig foam.
The anglers heavily baited a marginal area 10 yards from the bank with several kilo’s of groundbait and waited for further developments.
Whilst waiting for action on the method rods Richard continued to try to tempt one of several large Arapaima regularly surfacing in the swim.
A fast take on one of the margin rods saw the angler bending into an unseen carp.
Large swirls broke the surface as the tail of a Giant Siamese Carp propelled the fish towards the centre of the lake.
A fifteen minute battle followed which saw the fish making a series of high speed runs into the centre of the lake.
Richard continually applied pressure resulting in the Giant Siamese Carp finally being brought to the waiting landing net.
The fish was estimated to weigh 20kg’s and was released after photography.
Richard fished throughout the day catching several Rohu to 6kg’s in addition to a bonus Catla Carp of 2.5kg’s.
The angler also had several takes on free lined livebaits but unfortunately did not manage to land any of the fish due to a series of frustrating hook pulls! 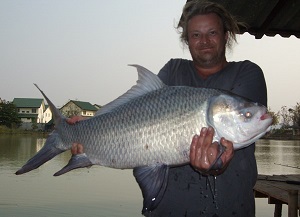