Fishing for Redtail Catfish at IT Lake Monster in Thailand

Predator Fishing at IT Lake Monsters with a lure throughout the early part of the morning Brendan hooked a series of hard fighting Pacu in addition to an exceptionally large Arapaima which tore off round the lake before finally breaking the anglers 30lb braid.
Brendan also hooked and successfully landed a nice Redtail Catfish in the region of 30 kg which was landed after a fifteen minute battle.
In the afternoon a decision was made to switch over to deadbait fishing tactics.
This tactic would prove to be an excellent choice and would see the angler land no less than ten Redtail Catfish in succession with weights ranging between 15-27kg. 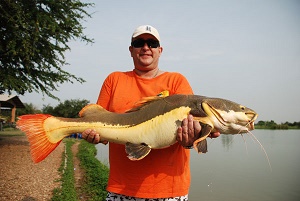