UK angler Richard Larkin fished for the last day of his trip at Palm Tree Lagoon.
Accompanied by Boy the angler decided on an all out assault on the Arapaima and other predatory species.
Richard assembled two float set-ups incorporating Fox floats with fluorocarbon hooklinks and super sharp Owner hooks mounted with small livebaits.
The floats were cast towards the centre of the lake in an attempt to hook one of the lakes larger predatory residents.
In addition the angler also baited a marginal area with deadbait and positioned a rod on the area with a mackerel fillet mounted on the hook.
A large Arapaima surfaced agonizingly close to the floated livebait in the central area of the lake causing the small Koi Carp livebait to go into a frenzy.
Several times the Arapaima visited the area each time causing the small livebait to go into a panic.
On one occasion the Arapaima aggressively hit the livebait causing the float to fly out of the water.
Yet still the hook could not find a good hold!
Richard continued to persevere with the predator angling but the extremely spooky inhabitants were not forthcoming.
Suddenly without warning the deadbait fished in the margins ripped off!
Richard immediately wound into the fish to be met with the solid resistance of a large Redtail Catfish.
The unseen catfish proceeded to tear around the lake hugging the bottom of the lake in a series of powerful runs!
A thirty minute battle followed which saw the angler tested to his limits by an extremely angry Redtail Catfish.
After a few fraught moments at netting the monster Redtail Catfish was finally netted by Boy.
The spectacular looking Amazonian Catfish was estimated to weigh 35-38kg’s and was found to be in perfect condition.
The stunning Amzonian predatory catfish was returned after a photography.
With the commotion of the previous battle clearly unsettling the majority of the lakes predatory species Richard decided to switch over to Method feeder tactics in an attempt to catch some of the carp species present in the lake.
Richard caught several Rohu and Catla Catla in the course of the last few hours with relatively low weights of around 4-6kg’s. 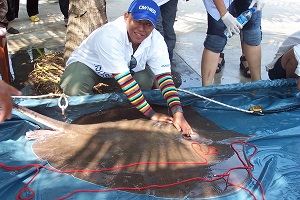