Fishing for Snakeheads in Thailand

UK angler Dale continued his fishing holiday with a trip in search of the highly aggressive and predatory Giant Snakehead.
After travelling to the dam the angler boarded a long tail boat and began to explore the vast natural reservoir.

After stopping at several likely looking spots and casting a succession of lures close to underwater structure the snakehead remained elusive.

Continued exploration of the gigantic lake saw the angler regularily changing lures in an attempt to hook one of the elusive River Monsters.

On stopping the boat close to a fallen tree the angler once again cast his lure towards the submerged tangle of branches and slowly retrieved it.

A large splash directly behind the lure revealed an attacking predator which had veered off at the final moment before disappearing back into the snags.

Further casts saw the snakehead following the lure but did not result in a strike.

Dale fished throughout the day and experienced several other snakeheads which took an interest in his artificial lures.

Sadly this would be a recurring problem for the remainder of the day with the snakeheads showing extreme caution to all lures cast at them.

Nok who guided the angler for the whole day managed a small snakehead later in the day but also failed to attract any further interest from the wily and predatory Giant Snakeheads. 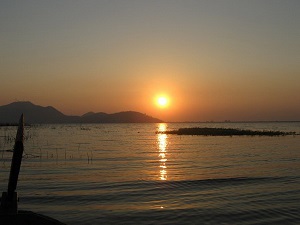