After a period of regular rainfall in the Kanchanaburi area the Fishsiam team fishing at Srinakarin Dam in search of Giant Snakehead.
On arrival at the lake conditions looked perfect with several new hatches of flies buzzing close to the surface of the lake and very good water clarity.
After boarding the longtail boat the anglers began to explore the natural reservoir quietly anchoring the boat in likely holding areas before making exploratory casts with a selection of lures.
A rippling on the surface in a quiet corner of the reservoir soon caught the attentions of Ohm and saw him quickly retrieving his homemade popper before expertly casting into the immediate vicinity of the disturbance.
After a few turns of the reel the surface exploded in a mass of water as a Giant Snakehead aggressively slammed into the lure!
The rod took up its full fighting curve as line was pulled from the precisely set drag on the reel in violent bursts.
The fearsome predator made a series of deep runs towards a sunken tree causing the angler to apply maximum side strain in an attempt to stop the fish’s escape.
The Giant Snakehead surfaced outside the sunken tree causing Ohm to wind furiously to regain line on the spool.
Moments later the Giant Snakehead was netted before being brought into the boat for unhooking.
The Giant Snakehead was weighed at a weight of 4.1kg’s before being released after a few trophy shots.
Continued exploration of the lake produced several other snakeheads with fellow anglers bagging Striped Snakehead to 2.1kg’s.
After a short break at noon the anglers resumed their exploration of the lake and ventured to another so far un-fished section of water.
With high banks lined with boulders making the area inaccessible from the bank and several tangled root systems submerged in the water the area looked perfect for a bite.
Casting tight to the bankside cover Ohm slowly retrieved the lure towards the boat.
A golden flash suddenly appeared behind the lure before the surface erupted in a mass of water as the lure was engulfed by a large Jungle Perch!
The fish was beaten after a short but spirited fight which saw it trying to dive down amongst the twisted root systems.
The Hampala Barb was weighed at a weight of 3.2kg’s before being released back into the reservoir.
After sleeping in a floating bungalow for the night the anglers resumed fishing the following morning.
The second day produced several more Giant Snakehead with weights ranging between 2.5-4kg’s 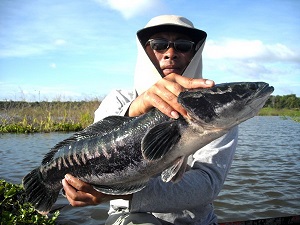