The final day of the TBS Network from Japan Giant freshwater stingray fishing expedition saw the anglers and film makers once again on the banks of the Maeklong River at Samut Songkran in Thailand.
The anglers quickly made their way down stream and placed livebaits at various intervals across the tidal river.
After almost two hours a clicking of the clutch on the multiplier indicated that a Giant freshwater stingray had picked up the bait.
Winding down into the stingray caused the rod to be arched over into full fighting curve as the anglers firmly set the hook.
The stingray reacted instantly moving powerfully across the muddy riverbed towards the main flow of the river.
Continuously piling on the pressure saw the Giant freshwater stingray moved off of the bottom on several occasions each time embedding itself into the muddy bottom to evade capture.
After a twenty minute struggle the stingray was finally pulled from its underwater lair where it proceeded to make a series of heavy runs in mid water.

Slowly pumping the fish to the surface soon revealed a Giant freshwater stingray wallowing beside the boat.
The Giant freshwater stingray was promptly netted before being secured alongside the boat and transported to the research team at the riverside.
The stingray was estimated to weigh 65kg’s and had a width of 1.3m’s recorded by the researchers.
The Giant freshwater stingray was identified as being a male and fitted with an electronic tag for future recognition before being promptly released back into the river.
Returning back to the prolific area the anglers repositioned their baits in readiness for another fish.
Fishing for several more hours resulted in a series of aborted takes with the anglers unfortunately not managing to catch any further stingrays.
With the tides gradually receding back to the sea the anglers retrieved the baits and headed back to the riverside hotel.

The results of the full expedition will be shown in a forthcoming documentary on TBS Network in Japan. 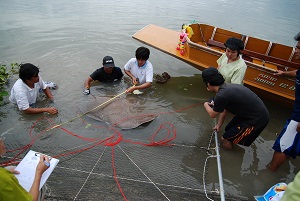