Hong Kong expat Lee and a fishing companion decided to start their Thailand fishing holiday by Fishing at Bangkok lake, Bungsamran Fishing Park..
On arrival at Bungsamran Fishing park the anglers positioned themselves on the public pier and quickly cast out large balls of local groundbait towards the hordes of showing Catfish.
It was not long before one of the floats suddenly disappeared and line began to be ripped from the open spool of the reel. Winding down into the unseen Catfish caused the fishing rod to arch over into its full battle curve as an angry Mekong Catfish powered off towards the opposite side of the fishing lake.
Lee piled on the pressure causing the Mekong Catfish to kite on a tight line towards the centre of the lake, continued pressure soon got the Mekong Catfish moving and after another ten minutes or so the Mekong Catfish was in netting range.
After scooping the Mekong Catfish into the net the fish was carefully hoisted onto the unhooking mat where it was estimated to weigh 25kg’s. After a few quick pictures the Mekong Catfish was lowered back into the lake where it swam off strongly.
Further casts towards the centre of the lake were rewarded with further Mekong and Striped Catfish which hungrily snapped up the large balls of groundbait fished at mid depth.
Both Lee and his friend bagged up as the days Mekong Catfish fishing trip progressed into the afternoon with both anglers experiencing double hook ups on several occasions.
The Mekong Catfish continued to slam into the balls of groundbait throughout the days Thailand catfish fishing session with both anglers landing several fish to an estimated 30kg’s.
After landing over twenty Mekong Catfish during the days Bangkok fishing trip to Bungsamran Fishing park the anglers decided to finish early and retire for a cold beer bringing the days fishing to an end. 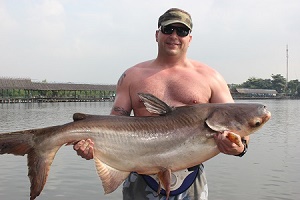