Casting to showing fish out in the centre of the lake soon saw the fishing rod burst into life as an unseen monster catfish powered off with the bait.
Winding down into the unseen fish saw the fishing rod bent into full curve as the angler applied pressure on the rapidly departing fish.

After a ten minute battle which saw the fish powering off on several unstoppable runs the Mekong Catfish was finally brought to the waiting net.
Upon hoisting the fish onto the mat a good sized Mekong Catfish was revealed which was estimated to weigh around the 20kg mark.

After a few quick photos the fish was released back into the lake before fishing for the Mekong catfish started once again.

Several more Catfish followed in quick succession of a similar size each testing the heavy duty fishing tackle to its absoloute limits.

As the days fishing session in Bangkok continued more Mekong and Striped Catfish followed one after the other pushing the anglers total for the days fishing at Bungsamran well into double figures.

Towards the end of the days fishing another high speed take signalled the beginning of another marathon battle this time lasting almost twenty minutes.
On the occasion the Mekong Catfish was a fair bit larger and required much more effort to hoist onto the mat.

The Mekong Catfish was carefully unhooked and lifted up for the cameras and was estimated to weigh in the excess of 35kg’s.

After a short period for photography the Mekong Catfish was gently lowered back into the lake where it proceeded to swim off strongly signalling and end to a hectic days fishing at Bungsamran Fishing park. 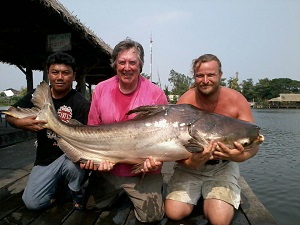