Visiting angler Johnny whilst on holiday in Bangkok decided to fish a short day fishing session at Bungsamran Lake.
On arrival at the lake the angler decided to fish from a private stilted fishing bungalow casting out large method feeders towards the centre of the lake.
With monster fish showing all over the lake the angler waited patiently for action as the floats bobbed out in the central part of the lake.
After only a matter of minutes one of Johnny’s rods fished at long range ripped off as line began to stream from the reel.
Lifting the rod into the unseen Mekong Catfish saw the fish continue its fast and determined run towards the distant corner of the lake.
With line rapidly disappearing from the reel the angler tightened the clutch and applied as much pressure as he dared.
This had the desired effect and slowed the Mekong Catfish’s run allowing the angler to replace line back onto the reel.
A further ten minutes passed before the Mekong Catfish was finally brought to the waiting landing net and hoisted onto the fishing platform.
The monster Mekong Catfish was estimated to weigh 30kg’s and was released shortly after photography.
Johnny’s friend was next to hook a monster Mekong Catfish whish fought in a similar fashion stripping the line of reel in a long determined run.
The Mekong Catfish on this occasion was of a similar size to the previous fish.
Action was thick and fast throughout the day with both angler’s landing a succession of monster Mekong Catfish and Striped Catfish.
At the end of the days fishing in Bangkok at Bungsamran Lake Johnny and his friend had landed an eighteen fish haul of Striped and Mekong Catfish topped by some monster catfish weighing over 30kg’s 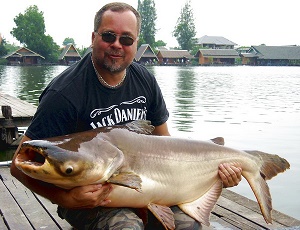