After a highly productive visit to IT Lake Monsters UK angler Mike travelled up to Chiang Mai province in Northern Thailand in fishing for Giant Snakeheads at Mae Ngat Dam.
An early morning start saw Mike start fishing at Mae Kuang Dam but fishing proved to be extremely slow and unproductive.
After changing location to Mae Ngat Dam the angler once again boarded a local fishing boat and began to explore the magnificent natural reservoir.
The angler fished at several areas on the gigantic dam carefully casting lures into potential holding areas and likely looking spots.
Weather conditions seemed far from ideal causing the surface of the lake to become very choppy and hindering location of the snakeheads.
Regular changing of the lure patterns between Cultiva, Rapala and homemade poppers still failed to yield any predators making the angler start to question his choice of venue.
Further exploration of the dam soon revealed predatory activity close to some submerged trees with a mass of small fry continually breaking the surface.
Slowly bringing the boat to a stop the angler reattached a surface popper to his fluorocarbon link and cast towards the disturbance.
After only two short casts the water suddenly exploded in a mass of spray as a Giant Snakehead slammed into the anglers lure.
The Giant Snakehead acting instinctively to protect its young had aggressively slammed into the lure before returning to protect its young.
Further casts into the immediate vicinity saw the Giant Snakehead follow the lure back towards the boat before veering off at the last moment.
Several more casts followed before the Giant Snakehead once again slammed into the lure causing the angler to respond by setting the hook firmly with a strike.
A short but spirited battle followed which saw the Snakehead violently shaking its head in an effort to shake free the treble hook.
After a few fraught final moments next to the boat the Giant Snakehead was finally gloved out of the water and hauled into the boat.
The Giant Snakehead was estimated to weigh 2kg’s and was released after a short photo session.
With the shoal of fry still clearly indicating the presence of the lurking snakeheads the angler repositioned the boat close to the surface disturbance and once again began to cast towards the fish.
After several more casts the lure was once again aggressively attacked causing the rod to bend fully as it took the weight of the rapidly departing snakehead.
With the snakehead steadily heading towards a sunken underwater obstruction the angler applied maximum side strain in an attempt to turn the fish away from the danger area.
On turning the fish it charged straight towards the boat causing the angler to wind furiously to keep in contact with the fish.
After a further few minutes the Giant Snakehead was finally beaten and lay on the surface of the water in netting range.
The Giant Snakehead was quickly scooped up before being brought into the boat.
The fish on this occasion was estimated to weigh 2.5kg’s and was released shortly after photography.
The angler continued fishing at Mae Ngat Dam well for the rest of the day but unfortunately did not experience any further action.
The short period of activity only allowing the angler a small window of opportunity in which to catch his preferred target species 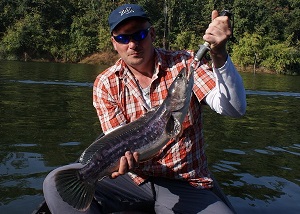