A short day fishing trip to Bangkok saw Singaporean angler Edward and his family fishing Thailand at Bungsamran Lake for Mekong Catfish.
Edward chose to fish from a private bungalow and fished with sliding float setups incorporating inline method feeders and super sharp Owner hooks.
After loading the feeders with groundbait the rods were cast towards Mekong Catfish which showed regularily at range.
On impact with the water one of the baits was immediately grabbed causing line to be ripped from the reel.
Closing the bail arm saw the rod wrenched down towards the water as a Mekong Catfish powered off with the bait.
The unseen Mekong Catfish embarked on a series of powerful runs towards the centre of the lake causing bow waves to appear out in the lake.
The Mekong Catfish chugged around for a few minutes out of netting range before it was slowly brought to the waiting net.
The muscular Mekong Catfish was hauled up onto the unhooking mat and was estimated to weigh 30kg’s the Mekong Catfish was released after a few trophy shots with the family.
Fishing for the Mekong Catfish resumed soon after and saw the family all taking turns to battle a succession of hungry Mekong Catfish and striped Catfish with relatively low average weights of 20-30kg’s.
As the days fishing at Bungsamran Lake in Bangkok continued, the anglers continued to regularily catch monster fish with the youngsters both beating their PB on several occasions throughout the days fishing.
At the end of the highly productive days fishing at Bungsamran Lake Edward and his family had amassed an eighteen fish haul consisting of Striped Catfish to 11kg’s and Mekong Catfish to an estimated 30kg’s+. 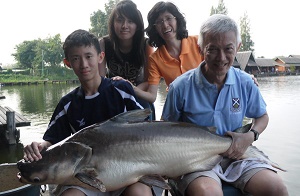