A visit to Now Nam Lake near Bangkok saw the Fishsiam team making an early start to avoid the Bangkok traffic.

On arrival at the lake the anglers assembled sliding float rigs and loaded inline method feeders with locally produced groundbait.
Casting out towards the no fishing bank to showing fish soon resulted in the float burying in the water as a fish moved away with the bait.

A ten minute battle followed which saw the 3.5lb Fox travel rod being bent almost double as a decent sized Striped Catfish proceeded to charge up and down the margins.

On netting the fish the fish was hoisted onto the unhooking mat to reveal a Striped Catfish of an estimated 10kg’s.

After a quiet spell in the early afternoon the anglers changed tactics and offered large method feeders packed with groundbait hard on the bottom over a lightly baited spot.
Thirty minutes passed before one of the rods fished over the baited area burst into life as yet another Striped Catfish powered off with the bait.

Another ten minute battle ensued once again testing the rod to its limits and seeing the anglers having to follow the fish along the fishing platform.
The Striped catfish was quickly netted and unhooked on the unhooking mat before being slipped back into the water.

After recasting the feeders back to the baited area another run soon had the anglers setting the hook into another fish.
The battle on this occasion was not unlike the first few fish but on netting the fish it was clearly a different species.
The fish was identified as being a Mekong Catfish and was estimated to weigh a mere 3.5kg’s.
The juvenile Mekong Catfish was the smallest example of this species we have ever encountered and was slipped back into the lake to grow on to become a monster fish in the future.

As the day progressed more Striped Catfish continue to home in on the baited area with several double hook ups being experienced by the anglers in the later part of the day.

After a quiet spell on the floats suddenly one of the float was dragged under water as a much larger specimen moved away with the bait.
A massive bow wave appeared out in the lake as line began to be dragged from the tightened spool of the reel.
With the reel being fitted with monofilament line of only 30lb’s it was clear that great caution would be required whilst playing this fish.
The unseen Mekong Catfish powered off down the lake at break neck speed causing the anglers to follow it down the platform.

Moment’s later disaster struck as the line fell slack on the water after being cut off on a neighbouring angler’s braided mainline.

After retying the rig the anglers once again cast out back to showing fish.
More Striped Catfish continued to grace the angler’s nets but no further action was experienced from the Mekong Catfish.

On two occasions throughout the day other local anglers landed monster Mekong Catfish estimated to weigh 55kg and 65kg’s.

After fishing for a short day session the anglers had caught a double figure haul of Striped Catfish to 12kg’s in addition to the bonus capture of an immaculate baby Mekong Catfish. 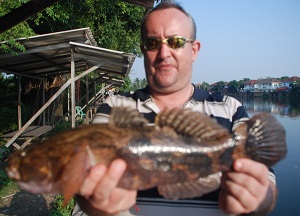