Jason and Jackie from the UK continued their Thailand fishing holiday with a fishing trip to Palm Tree Lagoon.
On arrival at the lake the anglers baited predator outfits with large mackerel fillets and cast out into the lake.
Whilst waiting for the predators to switch on the anglers also cast out method feeders loaded with groundbait in an effort to catch one of the elusive carp in the lake.
After a slow and uneventful start one of the predator rods burst into life as a large Redtail Catfish moved off with the hookbait.
A fifteen minute battle followed which saw the rod pulled into its full parabolic curve as the catfish charged round the lake.
Finally the fish was brought to the bankside where it was quickly scooped up in the net before being hoisted onto the bank.
The stunning Redtail Catfish was estimated to weigh 25kg’s and was released after a few pictures were taken.
After the disturbance created by the catfish the lake became quiet again for the next hour before the fish regained confidence and fed once again.
On this occasion one of the carp rods burst into life causing Jason to commence battle once again.
The fight lasted almost ten minutes and saw large swirls breaking the surface as the carp turned erratically trying to shed the hook.
The fish was finally netted after a few hairy moments in the margins to reveal a stunning hybrid carp of an estimated 15kg’s.
The beautiful carp was observed to be of the hybrid variety and clearly a mixture of Catla Catla and Giant Siamese Carp.
The fish was released after a few photographs before the rods were rebaited and recast to their prospective spots.
The days fishing passed relatively quickly with both anglers landing several good sized Redtail Catfish to over 20kg’s.
Only one further carp was landed during the day of a slightly smaller size on what was a relatively slow days angling 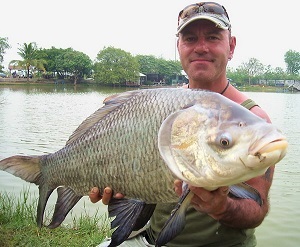