UK angler Mark continued his fishing holiday in Thailand with a visit to Palm Tree Lagoon in Ratchaburi.
After making an early start the angler began by assembling a predator rig with strong 80lb fluoro hooklengths and super sharp Owner hooks.
The experienced angler mounted medium sized deadbaits onto the hook and cast to a quiet marginal area close to the bank.
Mark also set-up an additional rod to fish for the various carp species which also reside in the lake.
After a slow start which saw the angler patiently waiting for a bite a fast and determined run signaled the arrival of the fish.
Winding down into the fish the rod was wrenched down towards the surface as a large predator moved off with the bait.
A protracted fifteen minute battle followed which saw the tackle tested to its absoloute limit by a Giant freshwater stingray.
After pulling the stingray from the bottom on several occasions the fish was finally brought up onto the surface where the angler wasted no time in bringing the stingray to the bankside.
The Giant freshwater stingray was quickly restrained by the guides and estimated to weigh 55-60kg’s.
After a few trophy shots for Mark’s new angling blog the Giant Stingray was released back into the lake.
Several aborted takes followed in the next few hours before the angler once again connected with a hungry predatory fish.
This occasion saw the fish act in an entirely different manner with the fish embarking on a series of unstoppable bottom hugging surges.
After playing the fish for several further minutes the anglers were in no mind as to which species was attached to the line.
The bulldog frame of a good sized Redtail Catfish soon confirmed the anglers suspicions as it crashed angrily in the margins.
After a few more moments the Redtail Catfish was finally brought to the waiting net where it was scooped up on the first attempt.
The Redtail Catfish was estimated to weigh 20kg’s+ and was soon being proudly displayed for the cameras.
After a few more trophy shots the Redtail Catfish was carefully released back into the lake.
With a few hours left of the days fishing at Palm Tree Lagoon the angler continued to fish well.
Unfortunately no further action was forthcoming on the predator rod with only a few more lesser carp species falling to the rod fished in the nearby margin for carp. 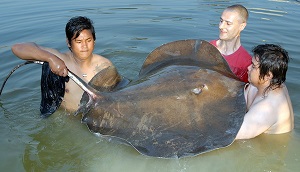