US anglers Kareem and Emad decided to try some predator fishing at Palm Tree Lagoon during their Thailand holiday.
On arrival at the lake the anglers soon cast out with predator fishing set ups fishing with deadbait.
In addition several carp and catfish rods were placed on a baited area close to the bank.
At a short period one of the predator rods burst into life and the anglers were soon rewarded with a nice Redtail Catfish of 25kg’s.
Further casts produced more predators with Emad bagging a nice Alligator Gar and Redtail Catfish before lunch.
After a short rest at lunchtime the anglers continued fishing and were soon rewarded by a beautiful Yellow Catfish which fell to one of the carp rods. Although only a small catfish weighing possibly 2 kg’s this was a most welcome capture and the first specimen landed by a Fishsiam client.
As the days Thailand predator fishing continued Kareem’s deadbait was picked up by a much larger predator.
With he fishing rod bent almost double and a seemingly unmovable dead weight on the end it was clear that Kareem had hooked one of Palm Trees resident Giant freshwater stingrays.
With only medium weight tackle Kareem applied as much pressure that was humanly possible in an effort to remove the stubborn predator from the lake bed.
After possibly fifteen minutes the Giant freshwater stingray relinquished its hold on the bottom and embarked on an unstoppable run along the margins.
Constant pressure from the angler soon took its toll on the stingray which breached the surface wildly thrashing its tail.
A few fraught moments followed as the stingray was dragged onto the grassy bank and its tail secured.
The Giant freshwater stingray was estimated to weigh 45-50kg’s and was proudly displayed for the cameras.
After the disturbance from the stingray the swim seemed to die for a while until another nice sized Redtail Catfish made an appearance.
The anglers fished at Palm Tree Lagoon for the rest of the day catching several other Redtail Catfish, Alligator Gar, Arapaima and Mekong Catfish and some smaller carp species before ending the days predator fishing session and returning to Bangkok. 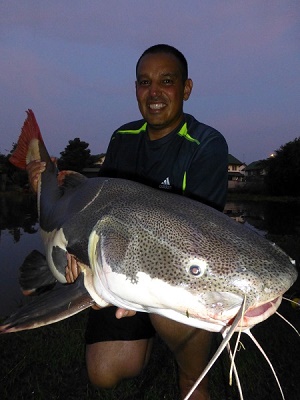