Peter and his friend from Germany returned to IT Lake Monsters in search of monster predators.
Starting early the anglers wasted no time in setting up lure fishing outfits before casting at the various predators regularly showing around the lake.
Peter and his fishing companion adopted a mobile approach casting Cultiva lures towards any tell tale signs of predators.
After several turns of the spinning reel Peter’s lure was savagely attacked as the first predator of the day homed in on his artificial lure.
A short but spirited battle saw the German angler soon landing an Alligator Gar of an estimated 14kg’s.
Further casts resulted in more Alligator Gar for both angler’s of a similar size in addition to Pacu to an estimated 10kg’s.
Changing over to a deeper diving pattern the European angler’s soon started getting amongst the better fish with both catching a succession of Redtail Catfish between 10-25kg’s.
After stopping for a short break for lunch the angler’s changed over to a mixture of mackerel fillet deadbaits and Tilapia livebaits fishing over lightly baited marginal spots.
Action was forthcoming from the off with both angler’s hitting into a shoal of big Redtail Catfish which tested their tackle to the limit.
Both Peter and his companion fished extremely well in the later part of the day catching numerous Redtail Catfish to 30kg’s.
At the end of the days predator fishing the European anglers had amassed a thirty five fish haul of various monster fish species. 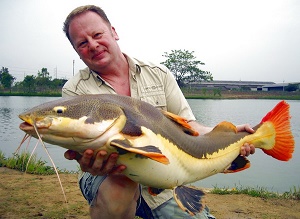