Fishing in Thailand for Wallagu Attu at Khao Laem Dam

Day two fishing at Khao Laem Dam in Thailand saw Piotr and his friends making an early start once again.
The anglers were quickly transported across the lake for thirty minutes before arriving close to a series of large islands.
The morning was spent casting lures into various likely looking areas in the hope of tempting a strike. With the exception of two dropped strikes the first part of the morning produced no action.
Another change to a different fishing area produced a strike on the first cast which saw the angler attached to a good sized predator which put a healthy bend in the spinning rod.
With line rapidly exiting from the reel the angler increased the drag and carefully played the unseen predator out into open water.
The fish stayed deep and pulled hard, creating large swirls several yards from the boat.
After almost ten minutes the fish surfaced only yards from the boat to reveal a good sized Wallagu Attu of around 6 kg’s.
The catfish was quickly netted and brought into the boat.
With trophy shots completed the Wallagu Attu was returned back to the lake and the anglers retired to the floating bungalow to escape the midday heat.
After resting for a few hours, the anglers continued fishing and managed to land a further two Jungle Perch before the days fishing at Khao Laem Dam came to a close. 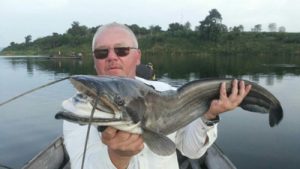 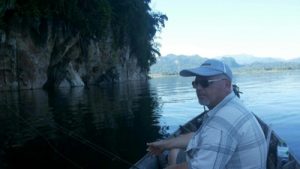