Fishing at Topcats Fishery in Koh Samui continues to produce

Visiting angler Terry from the UK fished at the highly prolific Topcats fishery in Koh Samui.
Terry fished an overnight session with a combination of method and deadbait tactics accounting for several good Mekong Catfish to an estimated 40kg’s.
Terry also caught six Redtail Catfish to 30 kg’s in addition to a bonus Rohu estimated to weigh 15lb’s and several Alligator Gars which aggressively picked up his dead baits. 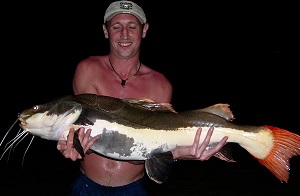