Bangkok specialist angler Brendan visited the highly prolific Topcats Fishery in Koh Samui.
Brendan fished a swim which had been previously baited the night before with a mixture of groundbait and maize.
Brendan chose to fish with 4oz Fox Method feeders loaded with Topcats groundbait. A short 3 inch hooklink with a long hair containing several pieces of popped-up maize completed the anglers set-up.
The Bangkok angler was soon into the carp with a Rohu of 6kg’s quickly taking his hair rigged hookbait. The fish was beaten after a relatively short battle on Brendan’s heavy weight outfit and was released after photography.
The swim in front of the angler was a mass of bubbles clearly indicating the presence of carp feeding in the swim.
A short time later Brendan’s popped-up maize hookbait was once again picked up. An extremely powerful and fast take heralded the start of a twenty minute battle which saw the unseen Giant Siamese carp charging around in the centre of the lake.
The fish was finally netted and was estimated to weigh 15kg’s.
Brendan continued to top up the swim with groundbait and maize as carp regularily showed over his baited area.
One hour later the angler’s rod received another extremely fast take.
Brendan once again commenced battle with another Giant Siamese Carp which proceeded to head for the floating weed bed on the other side of the lake.
After carefully coaxing the carp from the sanctuary of the snags the fish was played out in the relative safety of open water before being netted by Yut.
The fish was estimated to weigh 17kg’s and was released after photography.
Brendan fished throughout the day with a short break at midday for refreshments. The angler caught several more Rohu with weights to an estimated 8.5’s.
With the light fading a fast take indicated carp were yet again feeding on the anglers baited area. This time the fish felt much heavier than before and the fish remained deep throughout the majority of the battle. Twenty minutes after initially hooking the large Giant Siamese Carp the fish finally surfaced in front of the angler where it was expertly netted by Yut.
The Giant Siamese Carp was estimated to weigh 23-25kg’s and was found to be in immaculate condition.
The fish displaying a beautiful light colouration which is characteristic of all carp present in Topcats was carefully released after photography.
Brendan fished a ten hour session at the highly prolific Topcats Fishery capturing four Giant Siamese Carp with weights ranging between 15-25kg’s.
In addition Brendan caught four Rohu with weights between 5-8kg’s and also a bonus Sharp tooth Catfish of an estimated 7.5kg’s. 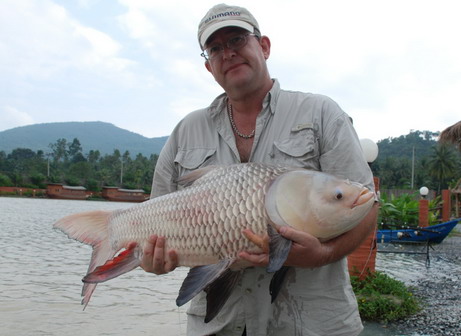