Visiting angler Nigel from the UK fished at the highly prolific Topcats fishery in Koh Samui for a two day session.
Fishing both method and dead baiting tactics Nigel accounted for six Redtails with weights to 34kg’s.
In addition the angler also captured several Mekong Catfish to over 36kg’s and a bonus Rohu of just over 20lb’s on method tactics.
At the end of his two day session Nigel had amassed a massive twenty three fish capture with a variety of different species making an appearance.
A great days fishing at Topcats in Koh Samui Thailand 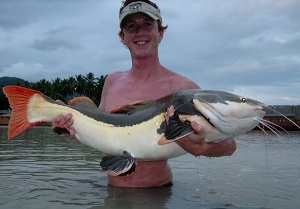