Visiting angler Mohamed from London fished at Topcats fishery in Koh Samui for a short evening session.
Fishing over a large groundbaited area with maize hookbaits the angler captured one of the lakes highly prized Julians Golden Prize Carp weighing 15lb’s. In addition Mohamed also caught several Mekong Catfish to an estimated 30kg’s.
After a short lull in the sport a slow tentative take signaled that the anglers maize hookbait had been picked up by a much more cagey fish.
After a fraught fifteen minute battle a massive 35lb 10 oz Niger ’Ripsaw’ Catfish was finally netted.
The extremely rare Ripsaw Catfish eclipsed the previous world record of 11kg’s caught previously from South America and is one of only seven specimens present in this record breaking venue. 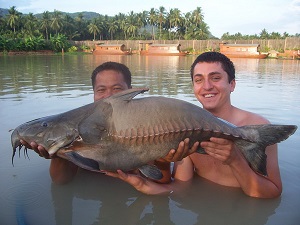