Jeab and Boy ventured to the highly productive IT Lake Monsters in Ratchaburi.
Testing a new Fly Fishing outfit the anglers cast a variety of flies into the record breaking venue in an attempt to capture some of the lake’s hungry predators.
The anglers enjoyed non-stop fly fishing action throughout the day with numerous predatory species being banked by the anglers to an estimated 35kg’s.
The large fly-caught predatory haul included several large Redtail Catfish in addition to Sorubim and Barramundi to an estimated 30lb’s. 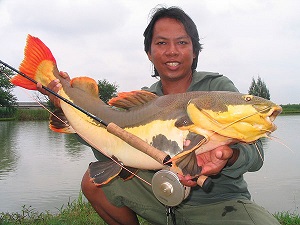