On the second day of Geoff’s fishing holiday the English angler made his way to Pilot 111 fishing ponds for fly fishing Bangkok.
On arrival at the Pilot 111 fly fishing complex of fishing ponds Geoff quickly assembled a # 6 weight outfit with a floating line.
Geoff chose to begin fly fishing on one of the Barramundi ponds and began expertly casting a Crafty Charlie fly at the many rising Barramundi in the ponds.
After several aborted takes Geoff’s Crafty Charlie was snapped up by a Barramundi as he gently teased it across the surface.
On setting the fly the Barramundi hurled itself out of the water in an amazing display of acrobatics.
The Barramundi continued to throw itself out of the water angrily shaking its head as the fly fisherman rapidly replaced line back onto the reel.
After several minutes the Barramundi succumbed to the pressure of the # 6 weight outfit and was scooped into the waiting landing net.
The Barramundi weighing only 2kg’s was quickly photographed before being released back into the fishing pond.
Further casts into the Barramundi ponds resulted in more Barramundi seeing Geoff land another four fish upto 3kg’s.
After a break for lunch the fly fisherman continued his Thailand fly fishing with an hour spent chasing Featherbacks in one of the adjacent fishing ponds.
After fly fishing for an hour and several dropped fish Geoff finally hooked a small Spotted Featherback of 1.5kg’s.
Geoff also tried his luck fly fishing for Asian Redtail and Giant Snakehead but failed to successfully land either species.
Whilst fly fishing for the Giant Snakehead and Asian Redtail Catfish the angler succeeded in hook up’s on several occasions but unfortunately failed to land his chosen quarry.
Moving on to the Pacu fishing ponds, Geoff was soon back amongst the fish landing two Pacu to 3kg’s in quick succession.
All too soon the days Thailand fly fishing came to an end with Geoff having an internal flight to catch in a matter of hours.
Geoff’s Fly fishing trip in Thailand appears on both the fishingmagic.com and fishandfly.com website. 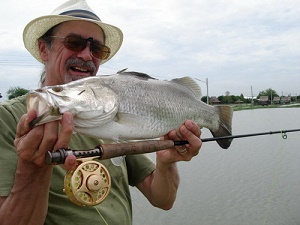