Visiting client and Fly fisherman Albert Chan from Singapore ventured to the Barramundi fishing ponds just outside Bangkok in Chachoengsao.
Guided by Boy the accomplished fly angler proceeded to carefully cast his fly into the various ponds on the highly prolific fishery.
The angler’s flies were continuously hit by the extremely aggressive and acrobatic Barramundi which tested his # 9 fly fishing outfit to its absolute limit.
The sport on this particular day could be described as non-stop with a take on almost every cast into the lake.
Albert’s expertly teased his delicately presented flies across the surface inducing take after take throughout the day.
Albert used a selection of different fly presentations throughout the day catching fish on a combination of surface and sub surface flies with weights to 6.5kg’s.
After fishing for a five hour period Singaporean angler Albert had amassed a thirty five fish capture consisting of specimens in the 3-6.5kg range all caught on fly fishing tactics. 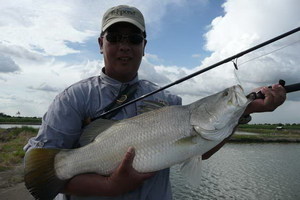