Fly fishing at IT Predator Lake

Returning client and Fly fisherman Ravi from the Netherlands once again visited IT Lake Monsters in Ratchaburi on a Thailand fly fishing trip.
Ravi used fly fishing tactics in an effort to tempt some of the hungry predators which reside in the lake.
Using a heavy weight fly rod and reel combination the angler expertly cast his flies to showing fish carefully teasing them across the surface.
After only a few casts the Dutch angler was soon playing his first predator of the session.
With the rod bent at full curve the angler skillfully played a good sized Asian Redtail before bringing it to the waiting net.
Further casts produced more predatory species with Redtail catfish and Sorubim also being landed to an estimated 20kg’s.
A brief spell of inactivity was broken with the arrival of the daily baiting of live fish by the owner.
As a pick-up truck was positioned next to the lake a large amount of livebaits was emptied into the bankside holding tank.
Immediately fish began to show waiting for the impending influx of livebaits about to be fed into the lake.
With the onsite staff shoveling livebaits into the edge of the lake the Dutch angler recast his fly into the nearby hordes of predators.
Immediately a violent take ripped the rod towards the water as a Sharp toothed catfish powered off with the fly.
After a ten minute battle the catfish was eventually netted.
With large amounts of predators apparent in the area Ravi continued to cast his delicately presented flies amongst the fish.
Each occasion saw the angler hooking another predator with Arapaima, Alligator Gar, Striped Sorubim and Asian Redtail Catfish, Giant Snakehead and Barramundi all making appearances.
The Dutch angler fished hard for the next few hours capturing various weird and wonderful predatory species.
With the livebait coming to an end sport slowed slightly seeing the angler adopting a roving approach in order to keep in touch with the fish.
At the end of the anglers day session he had accounted for fifteen fish with weights ranging between 8-21kg’s all caught whilst fly fishing at the highly prolific fishery. 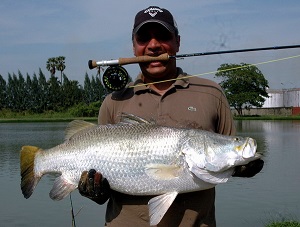