The final day of Andy’s Thailand fishing holiday saw the angler fly fishing predators at IT Lake Monsters.
On arrival at the lake at 6am the angler began Fly fishing for the predators with various saltwater flies.
After several searching casts Andy was soon connected to a hungry freshwater predator which powered off up and down the lake.
After a fraught ten minute battle Andy brought a lovely Alligator Gar to the waiting net which was quickly unhooked before a few trophy shots were snapped off.
Further casts with the fly saw the angler hooking several other species including Pacu, Asian Redtail Catfish and Redtail Catfish which all tested his fly fishing kit to the absolute limit.
A change over to deadbait and a heavier spinning outfit in the afternoon soon saw the predators beginning to feed again with several large Redtail Catfish to 30kg’s being landed in quick succession.
Further casts produced more predators and saw the angler landing a rarely seen Tambaqui of approximately 10kg’s.
As the day’s predator fishing continued Andy continued to catch various predatory species landing several Asian Redtail Catfish to 15kg’s in addition to more Redtail Catfish.
At the end of the days highly prolific Thailand fly fishing session Andy had amassed a sixteen fish capture topped by several stunning Redtail Catfish and a bonus Tambaqui of 10kg’s. 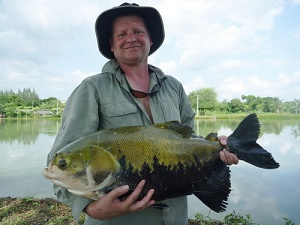