Fly fishing Thailand at IT Monsters

Frederik continued his Thailand fishing holiday fly fishing at IT Monsters.
On arrival the angler soon had his fly fishing outfit assembled and began casting his flies at the numerous fish showing out in the lake.

The angler didnt have long to wait before an Alligator Gar hit one of his delicate fly presentations ripping several yards of line from the centrepin.
Fredrik soon had the small Alligator Gar in netting range where it was scooped into the waiting net.

After releasing the fish Frederik continued his circuit of the IT monsters lake casting at any likely looking shows.

Swapping between various flies saw the angler landing a succession of Pacu and Alligator Gar with weights upto the 10kg mark.

After changing over to a sinking presentation the angler cast the fly out a considerable distance before slowly teasing back across the bottom.
This caused an almost instant reaction as the rod was pulled over into its full battle curve.

As line was ripped from the centrepin reel it was clear that this fish was of a much bigger stamp.
The fish hugged the bottom as it made a series of unstoppable runs causing the angler to follow the fish along the bank.

The Redtail Catfish was proudly held aloft for the camera where it grunted loudly throughout the photoshoot.

After releasing the catfish Frederik changed over to bait fishing and went on to land a succession of hard fighting Redtail Catfish ranging between 15-30kg’s in addition to several more Alligator Gar and Pacu.
At the end of the day fly fishing and bait fishing at IT Lake Monster the angler had landed a twenty fish capture topped by his fly caught Redtail Catfish. 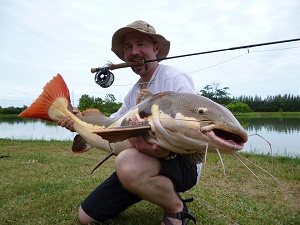