Returning client Ravi from the Netherlands revisited IT Lake Monsters on another Thailand fly fishing trip.
Using a # 9 weight fly outfit Ravi began to cast his carefully presented flies at fish showing in the lake.
The arrival of the daily bait fish soon saw the angler waiting at the bankside as hundreds of small Tilapia were released into the lake.
Seconds later the anglers rod arched round as a hungry predator aggressively attacked the anglers fly!
From the start the angler was forced to back wind as the fish ripped yard upon yard of line from the centrepin reel.
After a fifteen minute battle the fish was finally beaten and brought towards the net.
A large set of whiskers revealing the form of a good sized Spotted Sorubim of an estimated 15kg’s.
With fish still clearly in the area the angler once began fishing in the immediate vicinity of the bait fish.
Almost instantly another fish ripped off with the bait powering off into the centre of the lake.
A ten minute battle ensued which saw the angler fighting a decent sized Redtail Catfish of some 18kg’s.
Ravi continued to cast into the hot area as the staff at the lake carried on releasing the livebaits.
Fish after fish graced the net as the angler continued to carefully tease his flies through the swarms of predators greedily mopping up the livebaits.

At the end of the days Fly fishing in Thailand Ravi had amassed a double figure haul of predators consisting of Redtail Catfish, Sorubim, Snakehead and Asian Redtail Catfish with weights upto an estimated 22kg’s. 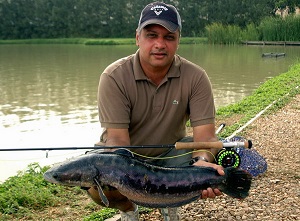