Another stingray fishing trip to the Maeklong River saw Tim Webb fishing for freshwater stingrays.
On arrival at the Maeklong River the angler started fishing in a quiet stretch of the river.
After almost two hours the decision was made to move location and the boat travelled further downstream.
After another period of activity the anglers moved to yet another spot and were soon rewarded by a take.
On winding down into the unseen Giant freshwater stingray the rod took up the strain of the fish and Tim made short work of the battle bringing the stingray to the surface after only a few minutes.
The stingray was promptly brought onto the boat without need for the net and was estimated to weigh 25kg’s.
After returning the fish Tim went on to hook a much larger stingray which he battled for well over an hour.
Unfortunately the hook broke and the stingray was not landed, leaving the angler to wonder how big the fish had been.
Tim fished on for a further few hours and managed to land another Giant freshwater stingray after a short ten minute battle.
The freshwater stingray on this occasion was slightly bigger than the first fish and was estimated to weigh 35kg’s. 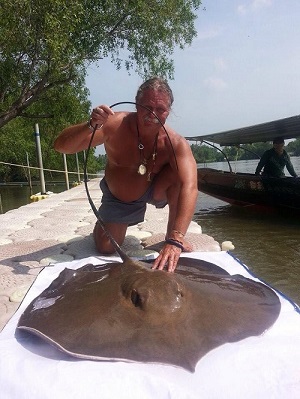