After fishing the previous day but failing to bank a Giant freshwater stingray the Fishsiam team once again returned to the Ban Pakong River in Thailand.
After positioning baits at various distances out into the main flow of the river the anglers waited patiently for a take.
Throughout the day the anglers received several takes only to retrieve the hooks to find the baits had been crushed flat.
The Giant freshwater stingrays were clearly in the area giving the team a much needed boost in confidence.
After making some slight alterations to the hooking presentations the anglers once again repositioned the rods.
Almost an hour later a high speed take on one of the rods signaled the beginning of an epic one and a half hour battle which would be fought out in the main flow of the river.
Winding down into the fish saw it respond by stripping yard upon yard of line from the reel as the unseen stingray moved off across the muddy riverbed.
Applying as much pressure as humanly possible saw the fish raised off the bottom on various occasions before it characteristically embedded itself into the muddy substrate.
The boat was moved several times to attempt to apply pressure from different angles to somehow shift the monster stingray.
After almost one and a half hours the fish finally was brought off the bottom and was quickly brought alongside the boat.
Moments later the fish dived down towards the bottom once again eluding capture.
More continued pressure saw the stingray once again raised from the riverbed with the team this time successfully securing the stingray on its next visit to the surface.
The Giant freshwater stingray was transported to the riverside where Dr.Zeb Hogan and Thai veterinary scientists examined the fish.
An external tag was fitted for future identification purposes to the 1.8m wide Giant freshwater stingray.
The large female Giant freshwater stingray was estimated to weigh between 180-200 kg’s.
On inspection by the scientists the fish was found to be a large female and was observed to be heavily pregnant.
A closer ultrasound examination by the scientists revealed that the stingray was carrying six live pups prompting the team to release the stingray soon after photography.
News of the epic freshwater stingray capture soon spread around the town seeing at least fifty spectators present at the time of release of the Monster Giant freshwater stingray.
Hirosumi Yamaguchi expertly recorded all events for a forthcoming NHK TV production in Japan. 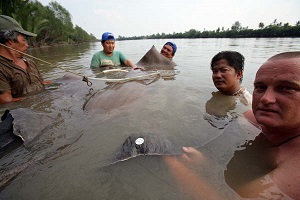