On his second day of freshwater stingray fishing Mark once again returned to the Maeklong River in Samut Songkran fishing for Giant freshwater stingrays.
With the previous days success still fresh in his mind the angler was soon fishing for stingrays on a wide bend of the river.
After placing baits at various intervals across the river the angler waited patiently for the stingrays to arrive.
Timing the fishing to coincide with the incoming tide it was not long before the stingrays arrived.
A slight tapping on one of the rods soon indicated the presence of a feeding stingray as line slowly began to trickle from one of the multiplier reels.
Winding down into the freshwater stingray resulted in the rod being wrenched towards the surface as the stingray responded with an awesome display of power.
The stingray moved away steadily with the bait removing yet more braided mainline from the spool of the reel.
A short battle ensued lasting only ten minutes before the fish was over powered by the big game fishing equipment.
The stingray was quickly brought over the waiting net and secured to the side of the boat.
After slowly returning to the riverside the stingray was placed in a holding cage ready for inspection by veterinary scientists from Chulalongkorn University.
The freshwater stingray was estimated to weigh 45kg’s and measured at a width of 1.2m’s.
After quickly returning to the productive area the angler wasted no time in repositioning baits in the tidal river.
A further hour passed without event before yet another take saw line being slowly removed from the Big game multiplier reel.
The battle on this occasion saw the stingray clamping onto the bottom on several occasions in an attempt to evade capture.
Each time the boat was repositioned above the stingray allowing the angler to apply copious amounts of pressure from directly above.
After a further ten minutes the freshwater stingray was finally beaten and brought over the waiting net.
The stingray on this occasion was estimated to weigh 30kg’s and was observed to be a male during a scientific examination by scientists from Chulalongkorn University. 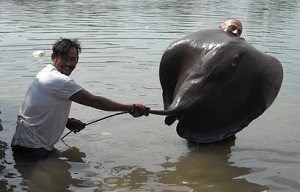