Another client from Palm Tree Lagoon this month was German angler Dani who was accompanied by his father on a stingray fishing trip to the Maeklong River.
On arrival the anglers were soon onboard the fishing boat and being transported down to the estuary section of the Maeklong River only a few km’s upstream from the Gulf of Thailand.
After the guides had finished positioning the baits the anglers sat back and waited for the arrival of the Giant Stingrays.
Several hours followed before one of the baits was picked up. On winding down into the unseen fish it was clear that it wasn’t a stingray. The fish moved extremely fast kiting on a long line and moving up through the water column, moments later the culprit was revealed in the form of a small Bull Shark of possibly 6kg’s.
After unhooking the Bull Shark the anglers continued to fish into the afternoon and finally manged to hook a Giant freshwater stingray as the tide began dropping.
The Giant freshwater stingray was easily beaten on the heavy duty fishing equipment and brought to the surface after a short but spirited fight.
The Stingray was observed to be a small male and was estimated to weigh 30 kg’s and was quickly released after a few trophy photos.
No further stingrays were caught. 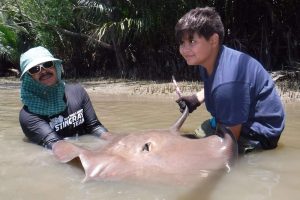