The Fishsiam team fished the Maeklong River in Samut Songkran province Thailand in order to field test a new fishing rod. After stingray fishing for a few hours the team experienced a savage take which saw yard upon yard of line stripped from the multiplier reel. A long drawn out battle commenced which saw the unseen Giant Freshwater Stingray some 15m’s below clamping onto the bottom on several occasions.
After an arm aching forty minutes a massive 1.9 m Giant Freshwater Stingray was brought up from the depths.
With the fish finally beaten it was quickly transported to the riverside where measurements were taken and the monster ray identified as a large female.
The prehistoric predator promptly gave birth to a live new born measuring a mere 30 cm
A weight of 180 kg’s+ was estimated for the Giant freshwater stingray before photography was completed and the mother and infant were quickly released back into the river.
This is a particularily encouraging sign for the Maeklong River and Giant Freshwater Stingray confirming our previous beliefs that Giant Freshwater Stingray populations in both the Maeklong and Ban Pakong Rivers are successfully breeding 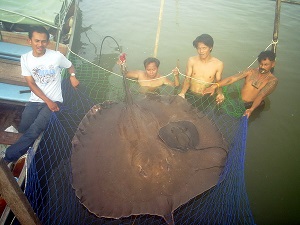