Mr.Tan a visiting friend and angler from Borneo joined Boy at the Maeklong River in search of Giant Freshwater Stingray.
Fishing at the Area 51 stretch in the rivers lower reaches the anglers were soon attached to an unseen underwater monster!
After a fraught thirty five minute battle a large male Giant Freshwater Stingray surfaced next to the boat.
The freshwater stingray was carefully secured before being taken to shallower water for photography.
The fish was estimated to weigh 70kg’s and was released after measurements were taken.
With a few hours still remaining the anglers latched into yet another Giant Freshwater Stingray which was beaten after a fairly short battle lasting just twenty minutes.
The stingray was identified as being a small male and was estimated to weigh 35kg’s. 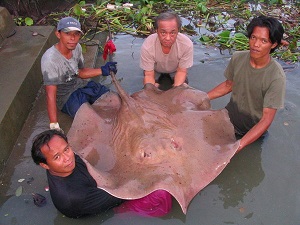