Day two of Peter Lipah’s Giant freshwater stingray fishing expedition to the Maeklong River in Thailand saw the angler up early and waiting for the incoming tide.
After previously capturing three different freshwater rays on the previous day fishing at the Bang Pakong River the German angler was eager to experience more action from one of the largest freshwater fish in the world.
Fishing in a previously productive area Peter was soon waiting patiently next to his carefully positioned rods.
After several aborted takes on one his rods the multiplier suddenly clicked into life as line began to evaporate from the reel.
The German specimen hunter quickly engaged the clutch in an effort to stop the rapidly departing fish.
The rod was quickly pulled into its full fighting curve as an unseen monster fish below powered across the bottom.
The battle raged on for a further one and a half hours continually clamping onto the bottom in an effort to evade capture.
The highly experienced angler valiantly battled the unseen beast using his large frame to lever the Giant freshwater stingray from the depths.
The fish was brought to the surface on one occasion before diving back into the depths before netting could be accomplished.
After almost one and a half hours the massive freshwater stingray was finally beaten as it languished on the surface next to the boat.
The fish was quickly surrounded by the net before being tied off on the side of the boat.
The large female with a width of 2m was estimated to weigh 190kg’s and was released after scientific data and photography were completed.
Peter after regaining his composure returned to the river to continue fishing and after only fishing a further hour was once again connected to another Giant freshwater Stingray.
The fight on this occasion was relatively uneventful and saw the German Big Game specialist bringing the fish to the surface after a mere ten minute battle.
The fish on this occasion was identified as being a small male and was estimated to weigh 45kg’s.
Peter’s continued success whilst fishing for Giant freshwater stingray is almost unparalleled by any western angler making him at the time of writing one of the worlds most accomplished Giant freshwater stingray anglers 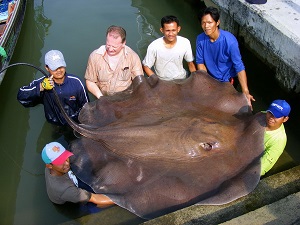