On an exploratory stingray fishing trip to Samut Songkran a returning client and friend from Singapore visited the Maeklong River in western Thailand. Guided by Boy the duo headed upriver towards Amphawa town in search of Giant freshwater stingrays.
The anglers fished on a wide bend of the tidal river in its lower reaches offering small livebaits anchored to the bottom with large weights. With the invading tide at its highest level a slow nodding of the rod tip indicated that some twenty metres below an unseen monster had taken an interest in the small snakehead livebait! After a short thirty minute battle a Giant Freshwater Stingray of an estimated 30kgs was brought into the boat, photographs and measurements were recorded and the fish was safely returned to the murky depths of the mighty Maeklong! 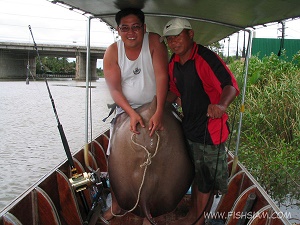