The second day of a two day Thailand fishing expedition in search of Giant freshwater stingray saw Calvin Tan, Mick and Mooky back on the banks of the tidal Ban Pakong River.
A fast take would indicate the beginning of a forty minute battle with the anglers once again taking turns to battle the unseen monster.
After an arm aching forty minutes had elapsed a small Giant freshwater stingray lay finally beaten beside the boat.
The stingray was identified as a small male and was estimated to weigh 50kg. The fish was released after photography.
The entire capture was caught on video and will be appearing in our video pages shortly 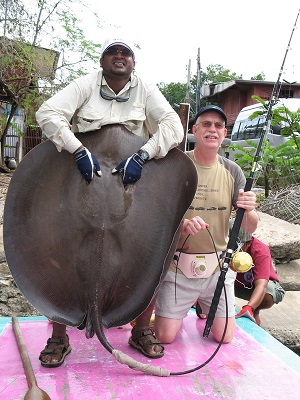