Yet another visit to the Ban Pakong River fishing for Giant freshwater stingray would see the intrepid fishsiam team on the banks of the mighty tidal River.
After previously losing two monster rays of record breaking proportions and the river displaying extremely low water levels no doubt influenced by the opening of the gigantic dams hundreds of kilometres upstream, conditions looked far from ideal for the capture of a Giant freshwater stingray.
Rick accompanied by Ow, Jeap and our resident stingray experts Ohm and Q waited patiently for the best part of the day.
A short but highly aggressive take indicated that something had picked up our small snakehead livebait!
With the unseen fish hooked some 300m away from the bank the fish responded to the setting of the hook by kiting on a long line towards the nearby margins.
Seconds later the wire trace was severed on a piece of concrete submerged in the margins!
After retying another rig the same rod would see an extremely savage take which would signal the beginning of an epic fifty minute battle!
The unseen monster would test the anglers to the limit towing a 25ft boat out into the central currents of the river.
After an agonizing fifty minutes the Giant freshwater stingray was brought into shallower water. With the fish firmly implanted on the river bed Ohm bravely entered the predators domain!
Carefully tracing the mainline to the giant ray?s front section Ohm courageously dived to the murky bottom expertly placing a strong rope through the creature?s nasal cavity.
After Ohm rapidly exiting the water the Giant freshwater stingray was secured to the boat before being brought to the rivers edge.
On arrival at the riverside a Thai national news team awaited the anglers.
The massive freshwater ray was photographed and measured at a width of 1.8m. The Giant freshwater stingray was estimated to weigh in the region of 120-130 kg and was safely released back to the mighty tidal river.
The fish was observed to be an extremely old female specimen displaying decay on its lower body section. Although highly unlikely that this nomadic predator will ever be caught by an angler again this fish is a highly distinctive creature with a small tail that seems to have suffered some form of injury or illness in the past.
A truly ancient warrior from prehistoric times caught from a wild and unexplored river system by the Fishsiam team. This capture was caught on film and will be featured in our video page shortly. 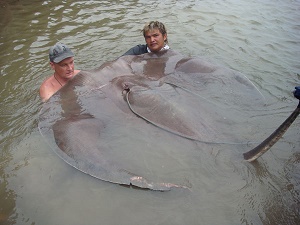