The FishSiam stingray fishing team visited the Ban Pakong River on yet another exploratory trip in search of the mighty Giant Freshwater Stingray.
Boy and local experts Ohm and Q latched into an unseen monster which saw the duo involved in a protracted battle lasting some fifty minutes. The result being a large male Giant Freshwater Stingray weighing just over 8 0kgs. The prehistoric Giant freshwater stingray was hooked from the bank and required help from local fisherman with a boat to tame the mighty beast after a thirty minute battle on both land and boat! 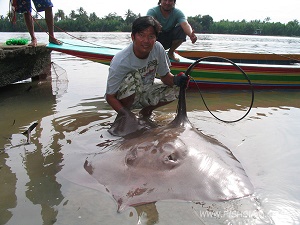